The Bindings Project - Teaser from Aaron Nanto on Vimeo.

This is a teaser for Monk's show at SEAF. It's going to be great!

What am I doing this weekend? Well, while ya'll are all basking in the glow of great sexy art and going to workshops by Mark Yu, I am going... to Orlando. Yes, it's my brother's wedding. I could kill him for picking this weekend, but - c'est la vie.

So watch for my Twitters about the Shakespeare-on-the-Gulf family-comedy that will no doubt be transpiring in Mousetown. But at least I get to catch the Thursday night show. Yay!
Posted by Mistress Matisse at 12:01 AM No comments:

“Well, they’re starting an enema one, I think,” I said.

“Good lord, what else do you want?”

I stared at him. “You are such a freaking pervert.”

“No, seriously! No one’s done that, it would totally sell.”

“You’re probably right, that’s the thing.” I thought about it. “What about furries? They haven’t done furries.”

“Yeah, why not? With the padding of the suit, you could probably get serious hang time in a suspension.”

“Honey, you realize you’re describing a piñata? What, tie up the furry and beat them until candy comes out their ass?”

Posted by Mistress Matisse at 1:25 AM No comments:

Can I just say that while I'm a girl who likes almost any movie with hot guys + lots of violence and explosions, I'm really, really extra-looking-forward to seeing Crank 2: High Voltage?

True, I'd buy a ticket to see Jason Statham perform in, say, a community theatre production of Bartleby the Scrivener. But I can't imagine anything better than watching him attach electrodes to his nipples, and taser his own cock. 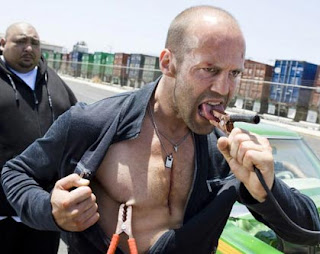 Well, all right - watching myself attach electrodes to him would actually be better. But this movie seems more readily available.

(P.S. Only Jason Statham can attach car batteries to himself and be okay. You are not Jason Statham. So don't do this in real life, okay? Don't taser your own cock, either.)

Posted by Mistress Matisse at 11:12 PM No comments: